Welcome to a monthly series of blog posts that aims to capture the current state of development for Welcome to Sysifus Corp!

These updates serve to keep track of how the game changes throughout its development and will be split into the following categories:

This month was the continued fine-tuning of a few game play mechanics. Namely what happens when you get “stuck” on the board and how to best design a solution around that.

Additionally, a revamped design for the Office Politics cards with illustrations makes the game look and feel so much more professional! 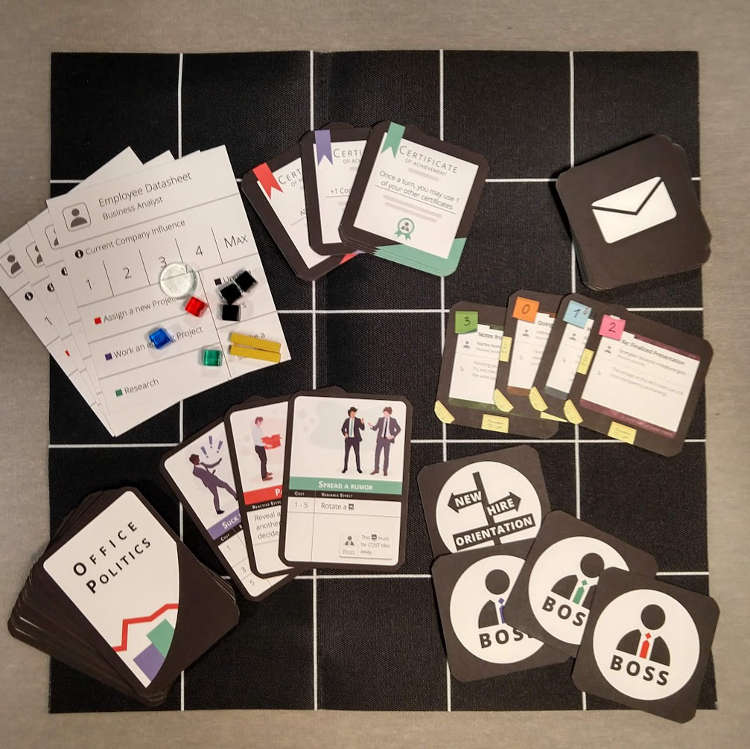 Several playtesters were getting “stuck” against walls with no options to advance their tokens. I’m going to detail the various ways I went about tackling this problem. 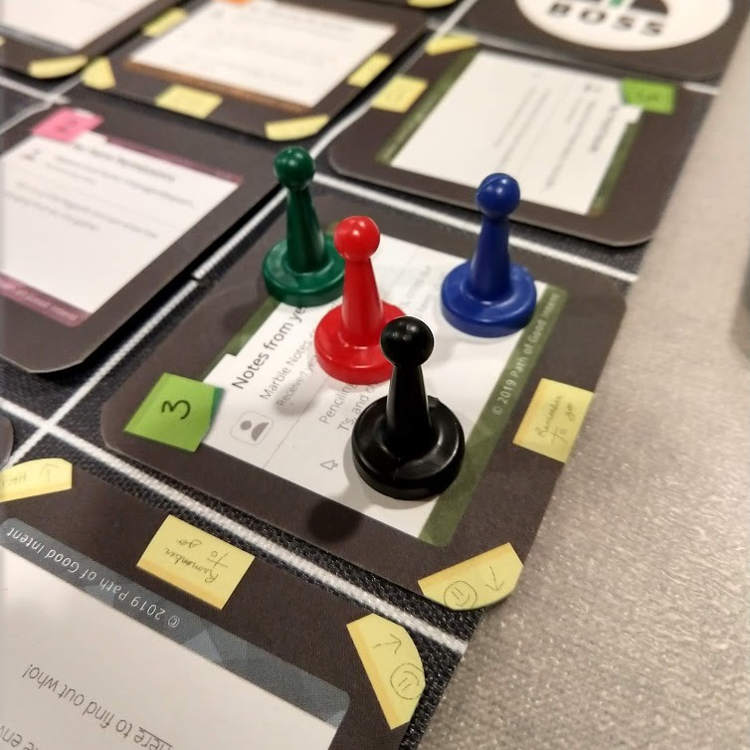 Option 1 - Allow users to build up resources while stuck

This was the first mechanic that I tested. By allowing players to gather resources, they would theoretically be able to get themselves unstuck. It also needed to be a mechanic that wasn’t the objectively better choice even when not stuck.

It was an incredibly band-aid approach to solving this issue. It difficult to determine if a player was technically stuck. It was also incredibly frustrating being forced to watch other players advancing themselves (especially if they were the ones who got you stuck).

This option also did not account for the fact that you can be stuck without any cards that could free you and the game would basically be over for you if you did not have the exact cards necessary in your hand. That’s a shitty spot to be in.

So to fix the above issues of not having the correct cards in your hand and not being sure when you are “stuck,” I created a new mechanic that allowed you to “research opportunities” to gain resources and recycle a card from your hand.

My initial worry was that players would abuse this ability even when not stuck to generate resources and to recycle their hands. But hardly anyone ever used this mechanic unless there was absolutely nothing else they could do. It was a very inelegant solution to the problem.

Option 3 - Allow users to lay their own paths

Shout-out to Jeffrey and Stacy for this brilliant idea–allow players to create their own paths by placing Sticky Note tokens on top of the cards. While this idea was immediately appealing, I had to make sure it wasn’t going to be abused. I didn’t want to shift focus away from the Office Politics cards and allow players to lazily build a straight path to the end. 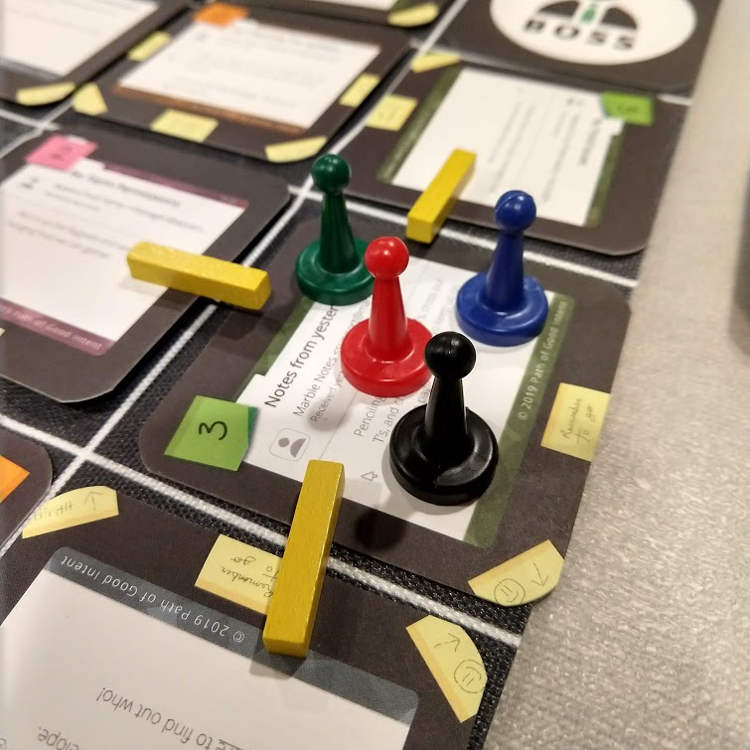 Four players not stuck with plenty of options.

So I limited the amount of Sticky Note tokens they could use and made it expensive to use by forcing players to prematurely end their turn when deciding to use one.

It did not occur to me exactly how expensive a turn was and players simply ignored the Sticky Note tokens. I also did not take into account that Sticky Note tokens were inherently costly due to the fact that they could be used by any player–why waste my actions on building a path for the next guy?

So currently, Sticky Note tokens simply cost 1 action to place, 1 Company Influence to purchase, and are limited to 2 per player.

This brings the total types of actions available each turn to 4:

Last month’s update introduced the theme so I wanted to dive a bit deeper and show off some of what I’ve been working on.

Every new employee starts their tenure at the company by placing their tokens on the New Hire Orientation card. 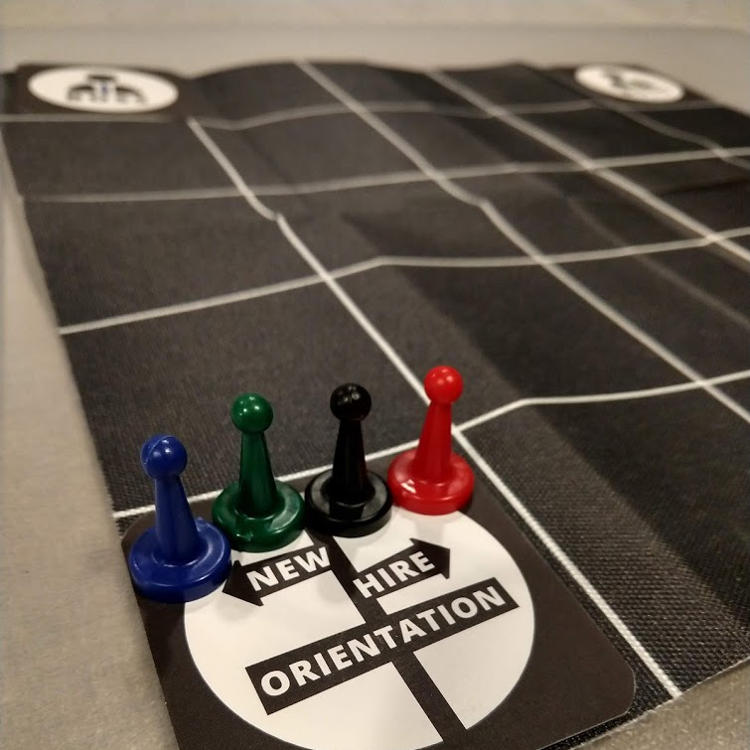 Start your career at the New Hire Orientation! Bosses are looming in the back.

Each Boss will award you a Certificate of Achievement for your hard work and dedication to the company. The first player to earn the favors of all the bosses before their Performance Review will be promoted! 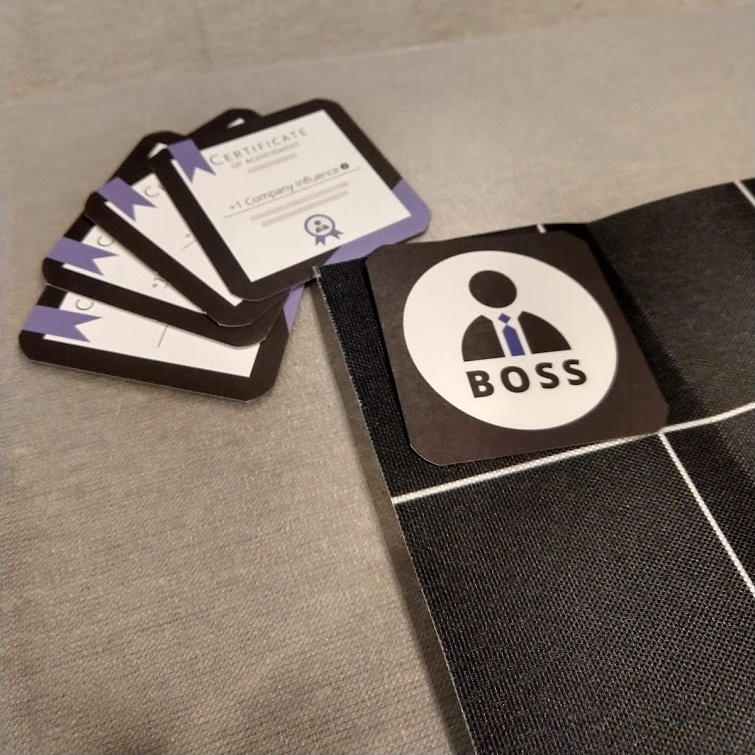 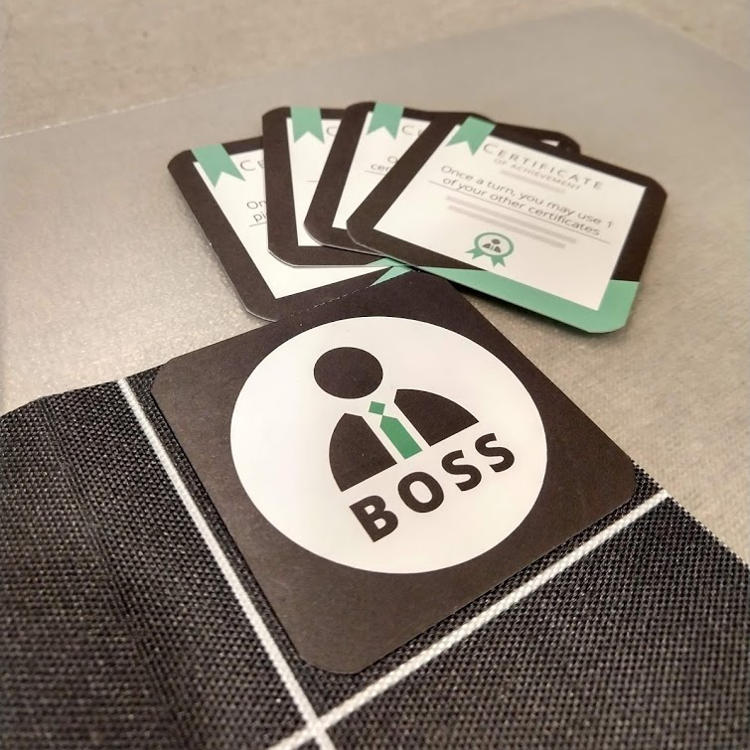 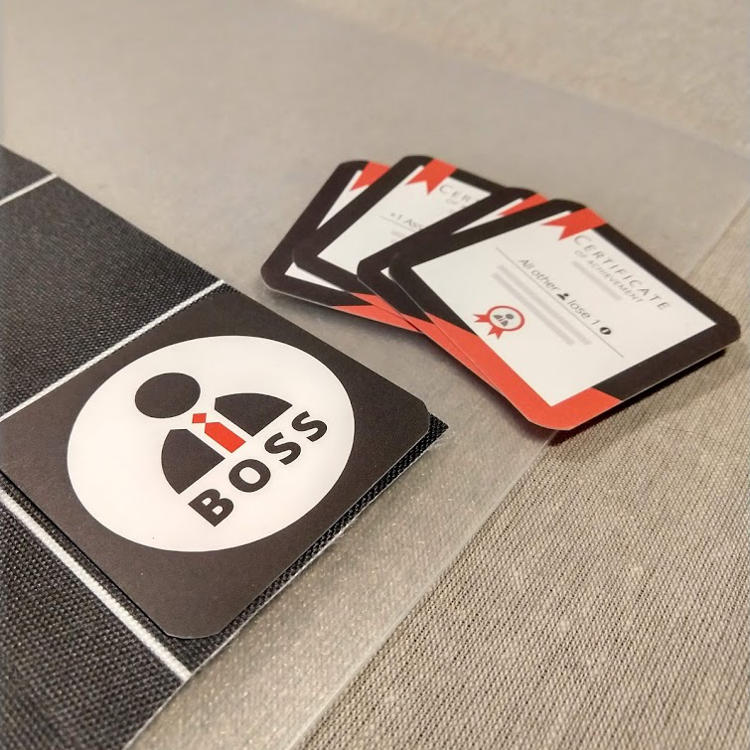 The three most important people in your lives starting today.

We don’t want brain-dead robots who are just here to satisfy their Project quotas and leave early at 5PM. You’ll find that the most successful employees at our company are the ones who are successfully leveraging their Office Politics Cards to climb the corporate ladder! 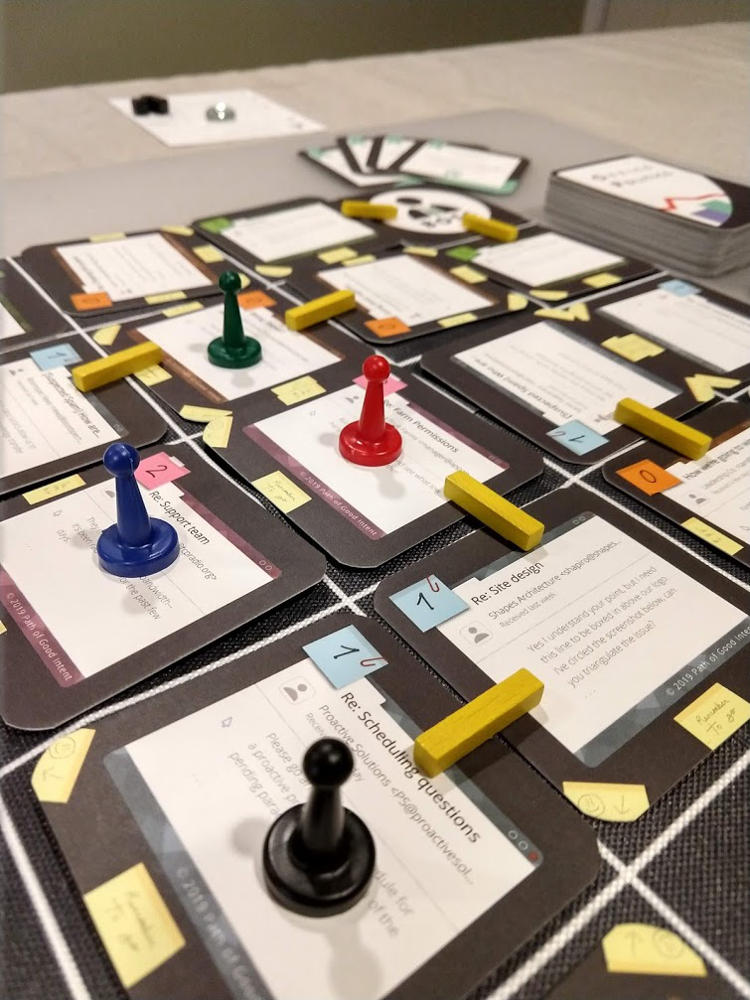 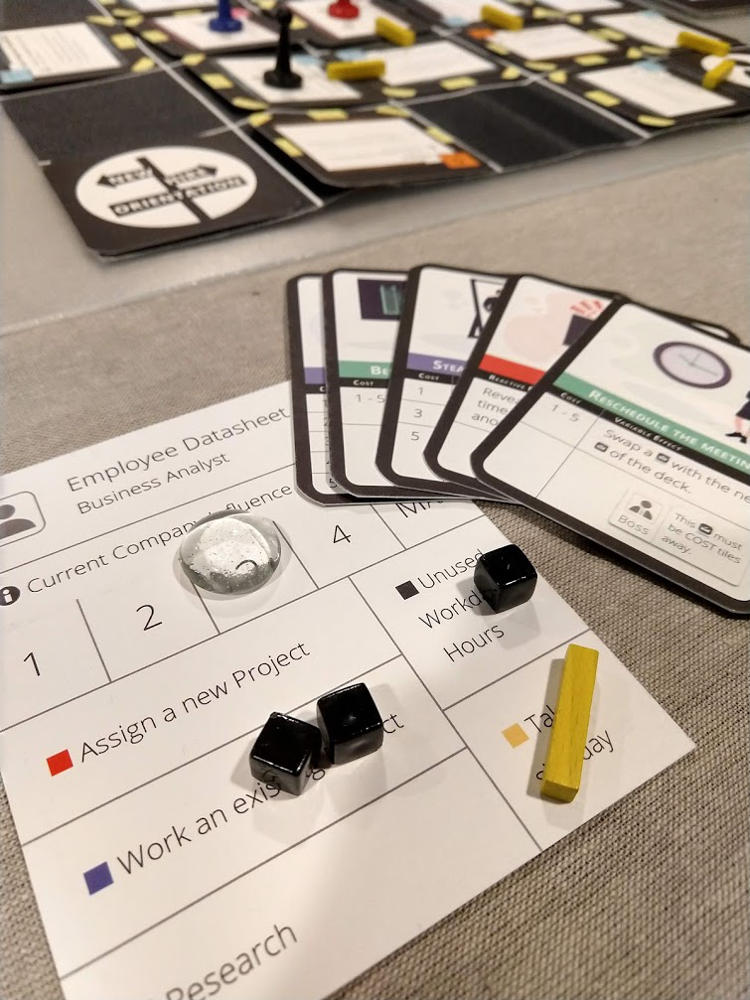 Employees giving it their 110% at work.

Having square cards for the Office Politics was a legacy decision that no longer made sense since these cards were not being placed on the board. It was difficult to visually tell the cards apart and very taxing for players to recognize what they could do during their turns.

So I added illustrations and made the cards longer. The illustrations were taken from a collection of beautiful SVG images that were free to use for anyone. You can find them here. Shout-out to Katerina for her amazing work.

I made a Reddit post asking the board game community how they felt about a game using free illustrations for their artwork. 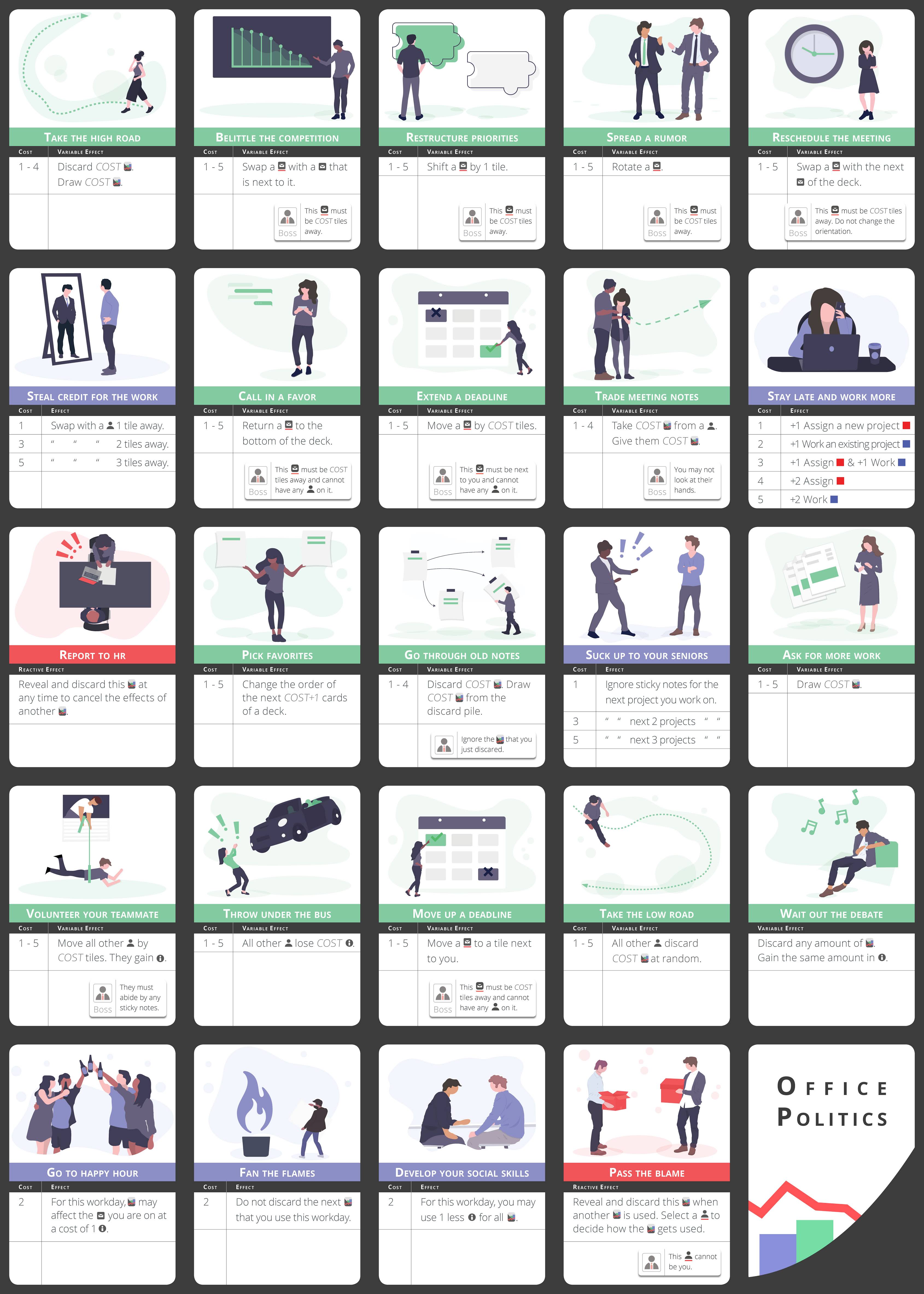 Overall, things are progressing smoothly. I am optimistic that I will be able to finalize the design in the upcoming weeks and hopefully create a fully packaged prototype by the Summer!

Thank you for reading the February update for Welcome to Sysifus Corp. Tune in next month for more updates!